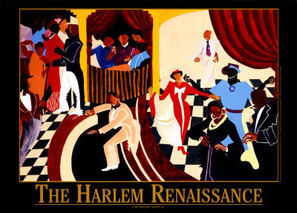 In the decades immediately following World War I, huge numbers of African Americans migrated to the industrial North from the economically depressed and agrarian South. In cities such as Chicago, Washington, DC, and New York City, the recently migrated sought and found (to some degree) new opportunities, both economic and artistic. African Americans were encouraged to celebrate their heritage and to become "The New Negro," a term coined in 1925 by sociologist and critic Alain LeRoy Locke in his influential book of the same name.Countee Cullen thought long and hard in his poems about his own and collective African-American identity. Some of his strongest poems question the benevolence of a Creator who has bestowed a race with such mixed blessings. Claude McKay, born and raised in Jamaica, wrote of the immigrant's nostalgia and the American negro's pride and rage. Jean (Eugene) Toomer remains a mystery. Light enough to "pass" and alone constituting the generation's Symbolist avant-garde, he appeared briefly on the Harlem Renaissance scene, became a follower of the mystic Gurdjieff, and disappeared into the white world.

Sterling Brown, for many years a professor at Howard University, emerged in the thirties with sometimes playful, often pessimistic poems in standard English and black vernacular and in African American and European forms. In many of Brown's poems strong men and women resist the oppression of racism, poverty, and fate.

The legacy of the Harlem Renaissance opened doors and deeply influenced the generations of African American writers that followed, including Robert Hayden and Gwendolyn Brooks. In the forties, fifties, and sixties, Hayden taught at Fisk University and the University of Michigan and served two terms as the Consultant in Poetry at the Library of Congress. Since the publication in 1945 of her first book, A Street in Bronzeville, Brooks has combined a quiet life with critical success. Her second book, Annie Allen, won the 1950 Pulitzer prize, the first time a book by a black poet had won that coveted distinction, and the last time until Rita Dove's Thomas and Beulah, almost forty years later. Brooks was a virtuoso of technique, her exquisite poems exploring, for the first time, the interior lives of African American individuals. Brooks' perspective shifted mid-career, her later work influenced by the politically and socially radical Black Arts Movement of the sixties.